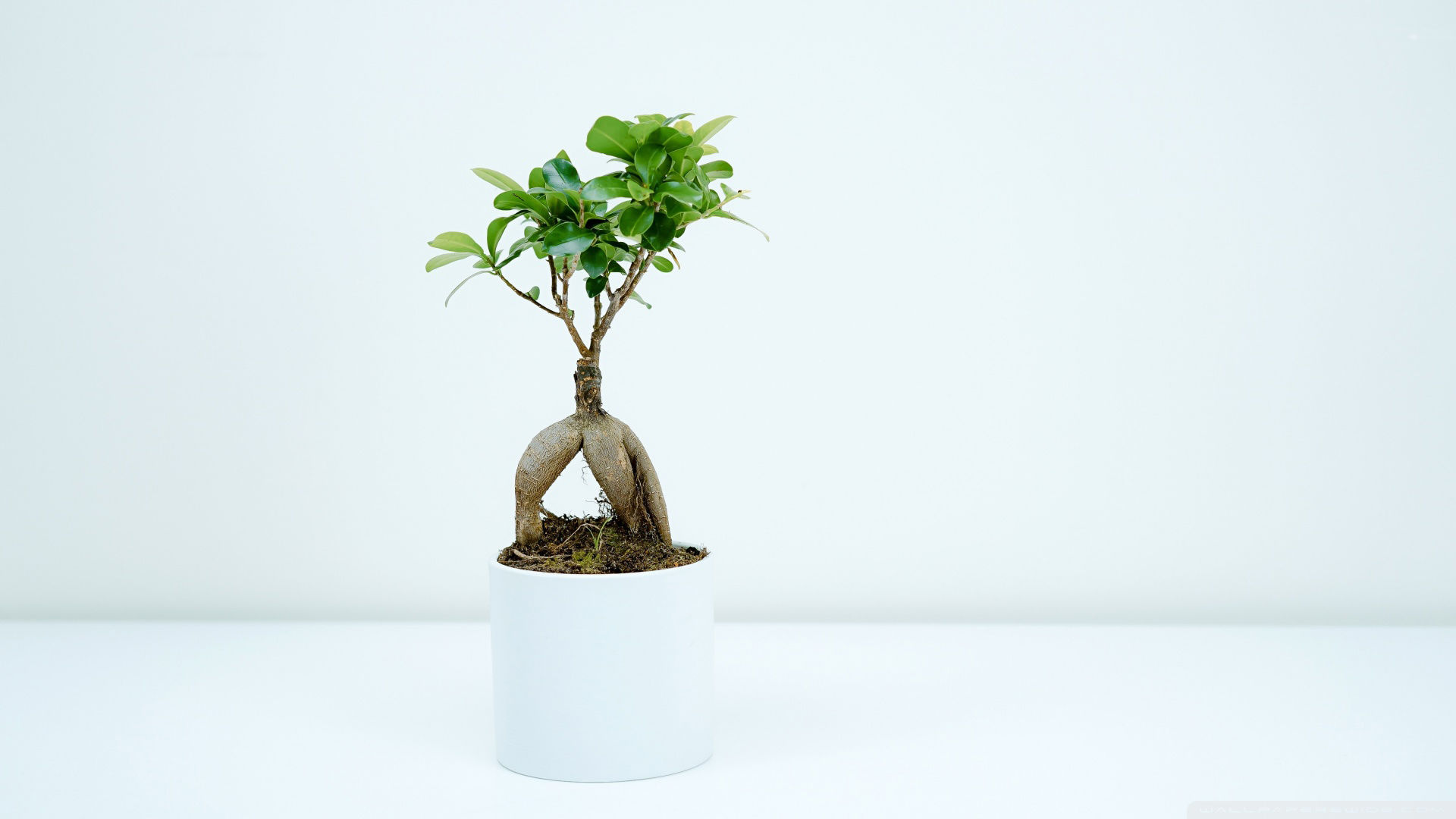 The Japanese art of bonsai originated from the Chinese practice of penjing. From the 6th century onward, Imperial embassy personnel and Buddhist students from Japan visited and returned from mainland China. They brought back many Chinese ideas and goods, including container plantings. Over time, these container plantings began to appear in Japanese writings and representative art.

In the medieval period, recognizable bonsai were portrayed in handscroll paintings like the Ippen shonin eden (1299). The 1195 scroll Saigyo Monogatari Emaki was the earliest known to depict dwarfed potted trees in Japan. Wooden tray and dish-like pots with dwarf landscapes on modern-looking wooden shelves also appear in the 1309 Kasuga-gongen-genki scroll. In 1351, dwarf trees displayed on short poles were portrayed in the Boki Ekotoba scroll. Several other scrolls and paintings also included depictions of these kinds of trees.

A close relationship between Japan’s Zen Buddhism and the potted trees began to shape bonsai reputation and esthetics. In this period, Chinese Chan (pronounced “Zen” in Japanese) Buddhist monks taught at Japan’s monasteries. One of the monks’ activities was to introduce political leaders to various arts of miniature landscapes as admirable accomplishments for men of taste and learning. Potted landscape arrangements up to this period included miniature figurines after the Chinese fashion. Japanese artists eventually adopted a simpler style for bonsai, increasing focus on the tree by removing miniatures and other decorations, and using smaller, plainer pots.

Around the 14th century, the term for dwarf potted trees was “the bowl’s tree” (鉢の木, hachi no ki). This indicated use of a fairly deep pot, rather than the shallow pot denoted by the eventual term bonsai. Hachi no Ki (The Potted Trees) is also the title of a Noh play by Zeami Motokiyo (1363–1444), based on a story in c. 1383 about an impoverished samurai who burns his last three potted trees as firewood to warm a traveling monk. The monk is a disguised official who later rewards the samurai for his actions. In later centuries, woodblock prints by several artists depicted this popular drama. There was even a fabric design of the same name. Through these and other popular media, bonsai became known to a broad Japanese population.

Bonsai cultivation reached a high level of expertise in this period. Bonsai dating to the 17th century have survived to the present. One of the oldest-known living bonsai trees, considered one of the National Treasures of Japan, can be seen in the Tokyo Imperial Palace collection. A five-needle pine (Pinus pentaphylla var. negishi) known as Sandai-Shogun-No Matsu is documented as having been cared for by Tokugawa Iemitsu. The tree is thought to be at least 500 years old and was trained as a bonsai by, at latest, the year 1610.

By the end of the 18th century, bonsai cultivation in Japan was becoming widespread and began to interest the general public. In the Tenmei era (1781–88), an exhibit of traditional dwarf potted pines began to be held every year in Kyoto. Connoisseurs from five provinces and neighboring areas would bring one or two plants each to the show in order to submit them to visitors for ranking.

In Japan after 1800, bonsai began to move from being the esoteric practice of a few specialists to becoming a widely popular art form and hobby. In Itami, Hyōgo (near Osaka), Japanese scholars of Chinese arts gathered in the early 19th century to discuss recent styles in the art of miniature trees. Many terms and concepts adopted by this group were derived from the Jieziyuan Huazhuan (Manual of the Mustard Seed Garden in English; Kai-shi-en Gaden in Japanese). The Japanese version of potted trees, which had been previously called hachiue or other terms, were renamed bonsai (the Japanese pronunciation of the Chinese term penzai). This word connoted a shallow container, not a deeper bowl style. The term “bonsai”, however, would not become broadly used in describing Japan’s dwarf potted trees for nearly a century.

The popularity of bonsai began to grow outside the limited scope of scholars and the nobility. On October 13, 1868, the Meiji Emperor moved to his new capital in Tokyo. Bonsai were displayed both inside and outside Meiji Palace, and those placed in the grand setting of the Imperial Palace had to be “Giant Bonsai”, large enough to fill the grand space. The Meiji Emperor encouraged interest in bonsai, which broadened its importance and appeal to his government’s professional staff.

New books, magazines, and public exhibitions made bonsai more accessible to the Japanese populace. An Artistic Bonsai Concours was held in Tokyo in 1892, followed by publication of a three-volume commemorative picture book. This event demonstrated a new tendency to see bonsai as an independent art form. In 1903, the Tokyo association Jurakukai held showings of bonsai and ikebana at two Japanese-style restaurants. Three years later, Bonsai Gaho (1906 – c. 1913), became the first monthly magazine on the subject. It was followed by Toyo Engei and Hana in 1907. The initial issue of Bonsai magazine was published in 1921 by Norio Kobayashi (1889–1972), and this influential periodical would run for 518 consecutive issues.

Bonsai shaping aesthetics, techniques, and tools became increasingly sophisticated as bonsai’s popularity grew in Japan. In 1910, shaping with wire rather than the older string, rope, and burlap techniques, appeared in the Sanyu-en Bonsai-Dan (History of Bonsai in the Sanyu nursery). Zinc-galvanized steel wire was initially used. Expensive copper wire was used only for selected trees that had real potential. In the 1920s and 1930s, Toolsmith Masakuni I (1880–1950) helped design and produce the first steel tools specifically made for the developing requirements of bonsai styling. These included the concave cutter, a branch cutter designed to leave a shallow indentation on the trunk when a branch was removed. Properly treated, this indentation would fill over with live tree tissue and bark over time, greatly reducing or eliminating the usual pruning scar.

Prior to World War II, international interest in bonsai was fueled by increased trade in trees and the appearance of books in popular foreign languages. By 1914, the first national annual bonsai show was held (an event repeated annually through 1933) in Tokyo’s Hibiya Park. Another great annual public exhibition of trees began in 1927 at the Asahi Newspaper Hall in Tokyo. Beginning in 1934, the prestigious Kokufu-ten annual exhibitions were held in Tokyo’s Ueno Park. The first major book on the subject in English was published in the Japanese capital: Dwarf Trees (Bonsai) by Shinobu Nozaki (1895–1968).

By 1940, about 300 bonsai dealers worked in Tokyo. Some 150 species of trees were being cultivated, and thousands of specimens annually were shipped to Europe and America. The first bonsai nurseries and clubs in the Americas were started by first and second-generation Japanese immigrants. Though this progress to international markets and enthusiasts was interrupted by the war, bonsai had by the 1940s become an art form of international interest and involvement.

Following World War II, a number of trends made the Japanese tradition of bonsai increasingly accessible to Western and world audiences. One key trend was the increase in the number, scope, and prominence of bonsai exhibitions. For example, the Kokufu-ten bonsai displays reappeared in 1947 after a four-year cancellation and became annual affairs. These displays continue to this day, and are by invitation only for eight days in February. In October 1964, a great exhibition was held in Hibya Park by the private Kokufu Bonsai Association, reorganized into the Nippon Bonsai Association, to mark the Tokyo Olympics.

A large display of bonsai and suiseki was held as part of Expo ’70, and formal discussion was made of an international association of enthusiasts. In 1975, the first Gafu-ten (Elegant-Style Exhibit) of shohin bonsai (13–25 cm (5–10 in) tall) was held. So was the first Sakufu-ten (Creative Bonsai Exhibit), the only event in which professional bonsai growers exhibit traditional trees under their own names rather than under the name of the owner.

The First World Bonsai Convention was held in Osaka during the World Bonsai and Suiseki Exhibition in 1980. Nine years later, the first World Bonsai Convention was held in Omiya and the World Bonsai Friendship Federation (WBFF) was inaugurated. These conventions attracted several hundreds of participants from dozens of countries and have since been held every four years at different locations around the globe: 1993, Orlando, Florida; 1997, Seoul, Korea; 2001, Munich, Germany; 2005, Washington, D.C.; 2009, San Juan, Puerto Rico. Currently, Japan continues to host regular exhibitions with the world’s largest numbers of bonsai specimens and the highest recognized specimen quality.

Another key trend was the increase in books on bonsai and related arts, now being published for the first time in English and other languages for audiences outside Japan. In 1952, Yuji Yoshimura, son of a Japanese bonsai community leader, collaborated with German diplomat and author Alfred Koehn to give bonsai demonstrations. Koehn had been an enthusiast before the war, and his 1937 book Japanese Tray Landscapes had been published in English in Peking. Yoshimura’s 1957 book The Art of Bonsai, written in English with his student Giovanna M. Halford, went on to be called the “classic Japanese bonsai bible for westerners” with over thirty printings.

The related art of saikei was introduced to English-speaking audiences in 1963 in Kawamoto and Kurihara’s book Bonsai-Saikei. This book described tray landscapes made with younger plant material than was traditionally used in bonsai, providing an alternative to the use of large, older plants, few of which had escaped war damage.

A third trend was the increasing availability of expert bonsai training, at first only in Japan and then more widely. In 1967 the first group of Westerners studied at an Ōmiya nursery. Returning to the U.S., these people established the American Bonsai Society. Other groups and individuals from outside Asia then visited and studied at the various Japanese nurseries, occasionally even apprenticing under the masters. These visitors brought back to their local clubs the latest techniques and styles, which were then further disseminated. Japanese teachers also traveled widely, bringing hands-on bonsai expertise to all six continents

The final trend supporting world involvement in bonsai is the widening availability of specialized bonsai plant stock, soil components, tools, pots, and other accessory items. Bonsai nurseries in Japan advertise and ship specimen bonsai worldwide. Most countries have local nurseries providing plant stock as well. Japanese bonsai soil components, such as Akadama clay, are available worldwide, and suppliers also provide similar local materials in many locations. Specialized bonsai tools are widely available from Japanese and Chinese sources. Potters around the globe provide material to hobbyists and specialists in many countries.

Bonsai has now reached a worldwide audience. There are over twelve hundred books on bonsai and the related arts in at least twenty-six languages available in over ninety countries and territories. A few dozen magazines in over thirteen languages are in print. Several score of club newsletters are available on-line, and there are at least that many discussion forums and blogs. There are at least a hundred thousand enthusiasts in some fifteen hundred clubs and associations worldwide, as well as over five million unassociated hobbyists. Plant material from every location is being trained into bonsai and displayed at local, regional, national, and international conventions and exhibitions for enthusiasts and the general public.