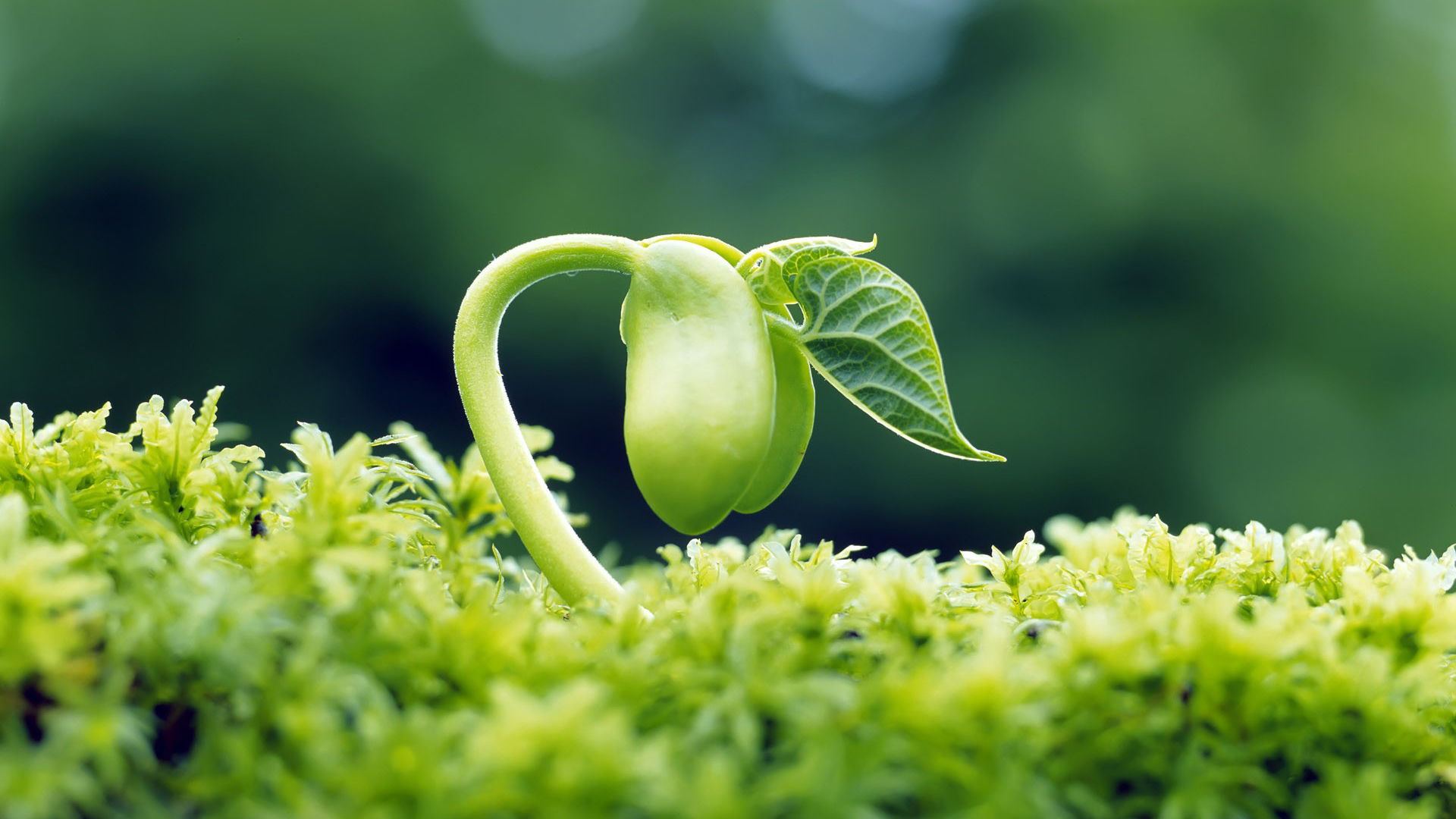 Most of the solid material in a plant is taken from the atmosphere. Through the process of photosynthesis, most plants use the energy in sunlight to convert carbon dioxide from the atmosphere, plus water, into simple sugars. These sugars are then used as building blocks and form the main structural component of the plant. Chlorophyll, a green-colored, magnesium-containing pigment is essential to this process; it is generally present in plant leaves, and often in other plant parts as well. Parasitic plants, on the other hand, use the resources of their host to provide the materials needed for metabolism and growth.

Plants usually rely on soil primarily for support and water (in quantitative terms), but they also obtain compounds of nitrogen, phosphorus, potassium, magnesium and other elemental nutrients from the soil. Epiphytic and lithophytic plants depend on air and nearby debris for nutrients, and carnivorous plants supplement their nutrient requirements, particularly for nitrogen and phosphorus, with insect prey that they capture. For the majority of plants to grow successfully they also require oxygen in the atmosphere and around their roots (soil gas) for respiration. Plants use oxygen and glucose (which may be produced from stored starch) to provide energy. Some plants grow as submerged aquatics, using oxygen dissolved in the surrounding water, and a few specialized vascular plants, such as mangroves and reed (Phragmites australis), can grow with their roots in anoxic conditions.

The genome of a plant controls its growth. For example, selected varieties or genotypes of wheat grow rapidly, maturing within 110 days, whereas others, in the same environmental conditions, grow more slowly and mature within 155 days.

Growth is also determined by environmental factors, such as temperature, available water, available light, carbon dioxide and available nutrients in the soil. Any change in the availability of these external conditions will be reflected in the plant’s growth and the timing of its development.

Biotic factors also affect plant growth. Plants can be so crowded that no single individual produces normal growth, causing etiolation and chlorosis. Optimal plant growth can be hampered by grazing animals, suboptimal soil composition, lack of mycorrhizal fungi, and attacks by insects or plant diseases, including those caused by bacteria, fungi, viruses, and nematodes.
There is no photosynthesis in deciduous leaves in autumn.

Simple plants like algae may have short life spans as individuals, but their populations are commonly seasonal. Annual plants grow and reproduce within one growing season, biennial plants grow for two growing seasons and usually reproduce in second year, and perennial plants live for many growing seasons and once mature will often reproduce annually. These designations often depend on climate and other environmental factors. Plants that are annual in alpine or temperate regions can be biennial or perennial in warmer climates. Among the vascular plants, perennials include both evergreens that keep their leaves the entire year, and deciduous plants that lose their leaves for some part of it. In temperate and boreal climates, they generally lose their leaves during the winter; many tropical plants lose their leaves during the dry season.

The growth rate of plants is extremely variable. Some mosses grow less than 0.001 millimeters per hour (mm/h), while most trees grow 0.025-0.250 mm/h. Some climbing species, such as kudzu, which do not need to produce thick supportive tissue, may grow up to 12.5 mm/h.

Plants protect themselves from frost and dehydration stress with antifreeze proteins, heat-shock proteins and sugars (sucrose is common). LEA (Late Embryogenesis Abundant) protein expression is induced by stresses and protects other proteins from aggregation as a result of desiccation and freezing.

When water freezes in plants, the consequences for the plant depend very much on whether the freezing occurs within cells (intracellularly) or outside cells in intercellular spaces. Intracellular freezing, which usually kills the cell regardless of the hardiness of the plant and its tissues, seldom occurs in nature because rates of cooling are rarely high enough to support it. Rates of cooling of several degrees Celsius per minute are typically needed to cause intracellular formation of ice. At rates of cooling of a few degrees Celsius per hour, segregation of ice occurs in intercellular spaces. This may or may not be lethal, depending on the hardiness of the tissue. At freezing temperatures, water in the intercellular spaces of plant tissue freezes first, though the water may remain unfrozen until temperatures drop below −7 °C (19 °F). After the initial formation of intercellular ice, the cells shrink as water is lost to the segregated ice, and the cells undergo freeze-drying. This dehydration is now considered the fundamental cause of freezing injury.

Plants are continuously exposed to a range of biotic and abiotic stresses. These stresses often cause DNA damage directly, or indirectly via the generation of reactive oxygen species. Plants are capable of a DNA damage response that is a critical mechanism for maintaining genome stability. The DNA damage response is particularly important during seed germination, since seed quality tends to deteriorate with age in association with DNA damage accumulation. During germination repair processes are activated to deal with this accumulated DNA damage. In particular, single- and double-strand breaks in DNA can be repaired. The DNA checkpoint kinase ATM has a key role in integrating progression through germination with repair responses to the DNA damages accumulated by the aged seed.

Plant cells are typically distinguished by their large water-filled central vacuole, chloroplasts, and rigid cell walls that are made up of cellulose, hemicellulose, and pectin. Cell division is also characterized by the development of a phragmoplast for the construction of a cell plate in the late stages of cytokinesis. Just as in animals, plant cells differentiate and develop into multiple cell types. Totipotent meristematic cells can differentiate into vascular, storage, protective (e.g. epidermal layer), or reproductive tissues, with more primitive plants lacking some tissue types.